“The Nightmare” by Sami Mohammed

“You shouldn’t get to live in society and give nothing back. People complain about their taxes, yet they do nothing for the community. That makes me furious.” Kathleen Turner

The first thing that comes on your mind when see Mohammed’s artworks is the wave of changes around the globe, price that people have to pay to earn their right to live freely & chain-less. The sculptures reflect the furious state we all get in when we feel angry & helpless toward the vulnerable & suppressed nations. Mohammed choice to bring out all his furious feelings and anger in what we can describe “masterpiece” sculptures.

“A Throng At An Exit”

“A Throng At An Exit”

The only thing I hoped to see is a 3D paintings instead of the flat technique. 3D technique adds a dynamic element to the artwork & makes the objects come out of the canvas, just like the sculptures that were alive though they weren’t moving. 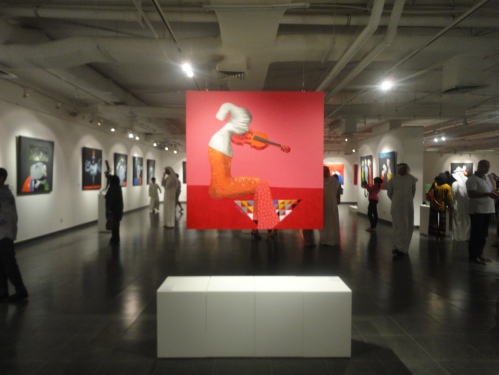 Kuwaiti Artist Sami Mohammad (art creativity), born in 1943 in a region east of Kuwait. He studied sculpture at the Fine Arts College in 1970, and obtained an honoring diploma from Cannes Sur La Mer in France in 1970. He is one of the founders of the Kuwaiti Association for Formative Arts established in 1967. He obtained several local and international awards, and was charged by the National Council for Culture, Arts and Literature with designing the encouraging state award in 1993 and designing and creating the honoring state award and medal in 2000.