Jeffar Khaldi, if you don’t know him remember this name very well! Palestinian artist, born in Lebanon, Jeffar brings along his views on causes & issues in bold expressive art with a touch of sarcasm. “Artificial Color” is a solo exhibition hosted by Dar Al Funoon, Kuwait. In a quick, on spot interview -he had to leave the next day to Dubai- Al Maha talked with artist Jeffar Khaldi about his latest, the harsh messages his artworks represent, how politics & art merge together and more… Jeffar opens up for Al Maha readers in honestly shocking way! 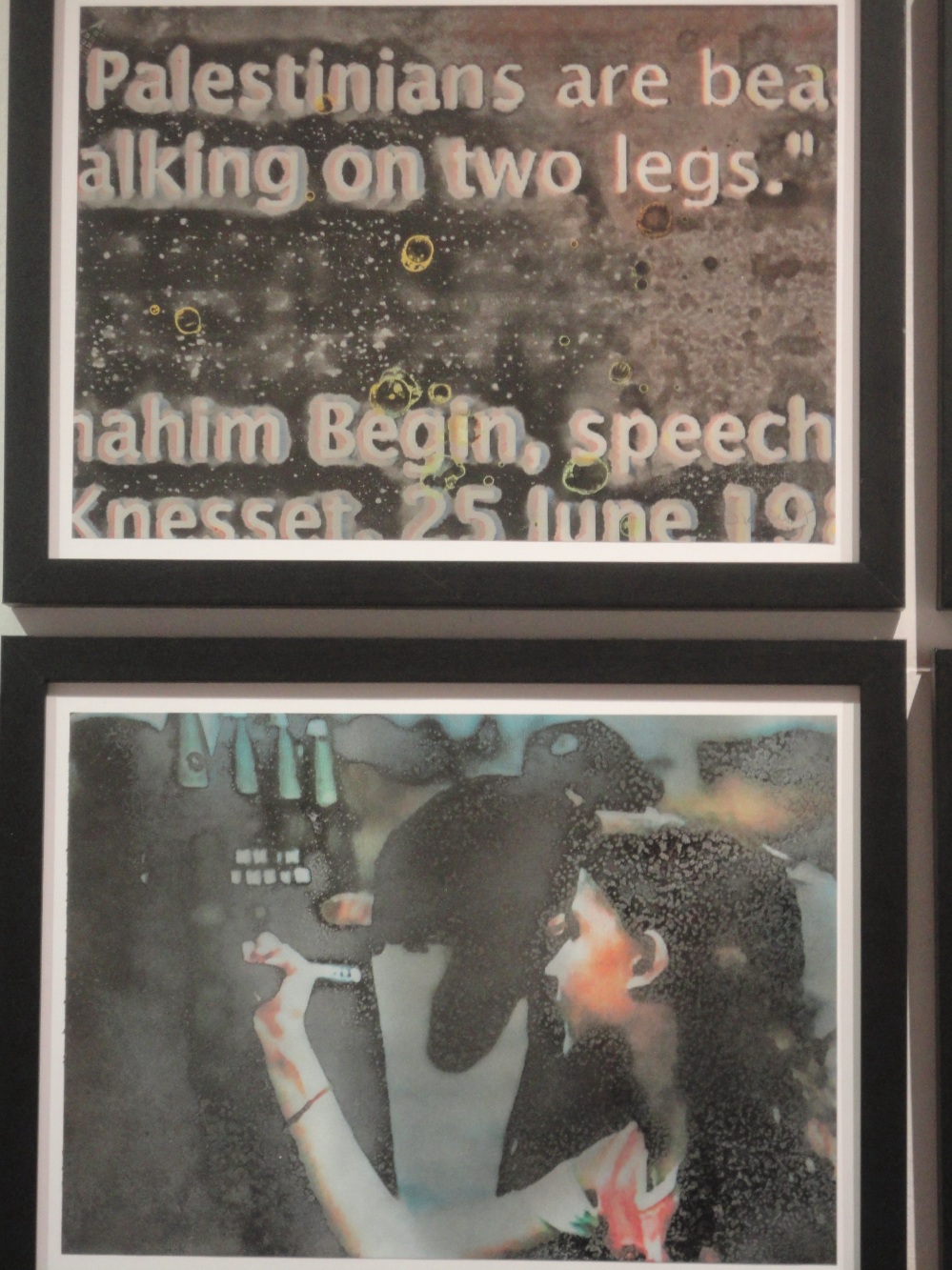 Al Maha: Talk to us about “Artificial Color” exibition?

Jeffar: This is the first time in I exhibit in Kuwait, very pleasant and happy for the experience. I want to present in “Artificial Color” meaning, depth and make people think about it took 3 to 4 months preparations and some collections were inspired by The Arab Spring. (Libya) Collection is mixed images between what was going on in Libya & Mad Max the movie, where I felt similarity between the two. Printing with spray painting, people who know the movie couldn’t tell the difference between Mad Max & Libya which proves my vision and comparison were on the right place. 2nd collection is (Anger) where I also combined Punk rock and the anger in Arab streets among the young generations. 3rd collection (Happy Feist) shows Arabian modernized covered women with vials. And finally (Balls) reflects images of palestinian kids in Israeli jails while the last picture shows Israelis crying like babies. In this particular piece I want to show that israelis mistreat children without considering their age or their stolen childhood whereas they (israelis) cry like babies if the face a minimum misery. So are they playing the “men” role on vulnerable kids yet they can’t stand in front silly incidents?!

Al Maha: So art is a way to express your feeling of what’s going on in Palestine?

Jeffar: Sometimes, honestly I go back & forth.. When I feel the need to bring out my ideas towards them get them out of the way. I sometimes use events to state something but not too serious. I don’t want to be considered a political artist that’s why I add a twist of sarcasm to my work.

Al Maha: But “Artificial Color” shows you’re effected with what’s going on. Aren’t you concerned to be categorized & described as “political artist”?

Jeffar: It’s funny because some people interfere in which direction I should take or what I work saying “do political artworks” or don’t do it.. But you can’t please everyone and in the end I do what I want to do. And as palestinians we are not only passionate about our case but humanity issues overall, and through art I try to uplift the curtains on topics and pictures that are not talked about or shown. I explore, expose and inform. 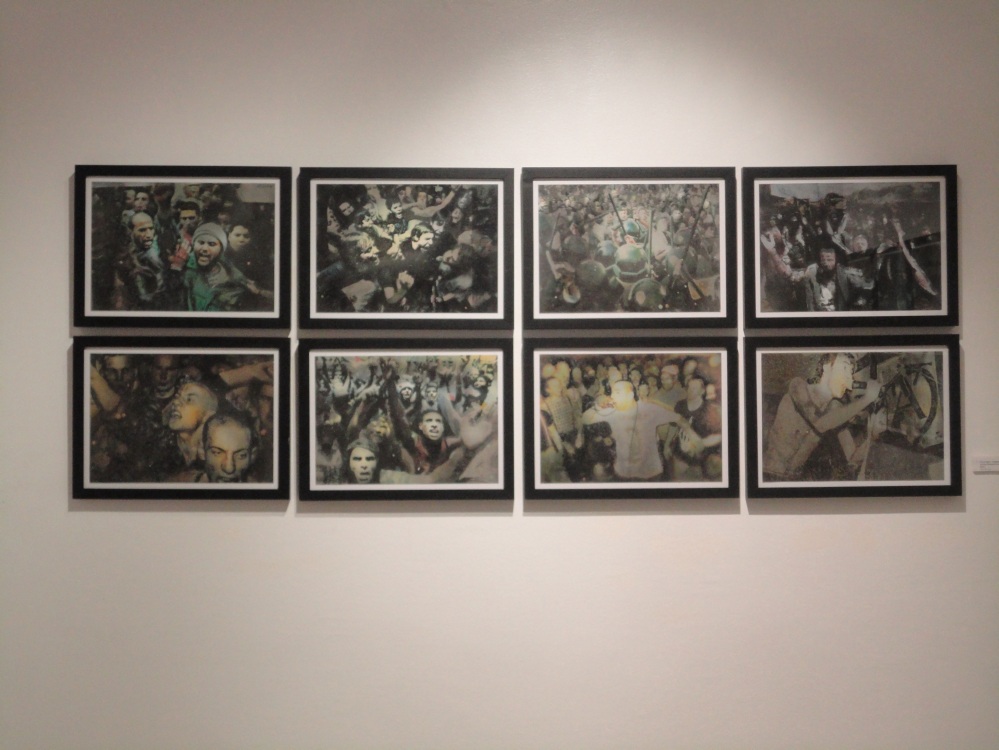 Al Maha: The Read More collection are images that were shown during Gaza War and Lebanon War by Israel both in 2006. Why did you bring it back to attention now in 2011?!

Jeffar: Because I feel nothing was done about it! The more I see and think about the Spider looking bombs that covered the entire Gaza Strip they looked like a spider net spread all over Gaza, adding to that only kids were dying not politicians or members of Palestinian factions, all that happening and the world was only standing, watching and doing nothing! People from around the world should open their eyes into reality and see what Israel are doing against the helpless palestinians people… They want to element us! And I feel I have the duty as an artist to reach out for the world and open eyes.

Al Maha: Sensing the anger against one of the most powerful community worldwide, don’t you get criticized?

Jeffar: Well (smiling) I get criticized a lot! I made enemies especially when I created an artwork about Auschwitz Death Camp – a camp constructed by the Germans in World War || where millions of Jewish were killed – contains real pictures of the area’s beautiful buildings, neighborhoods, streets, a football yard… Because this area is related to “bad Jewish history” some criticized me & wondered how do I shoe the area as a masterpiece when it is considered a “death camp”. But I don’t care… I stand for my own believes. 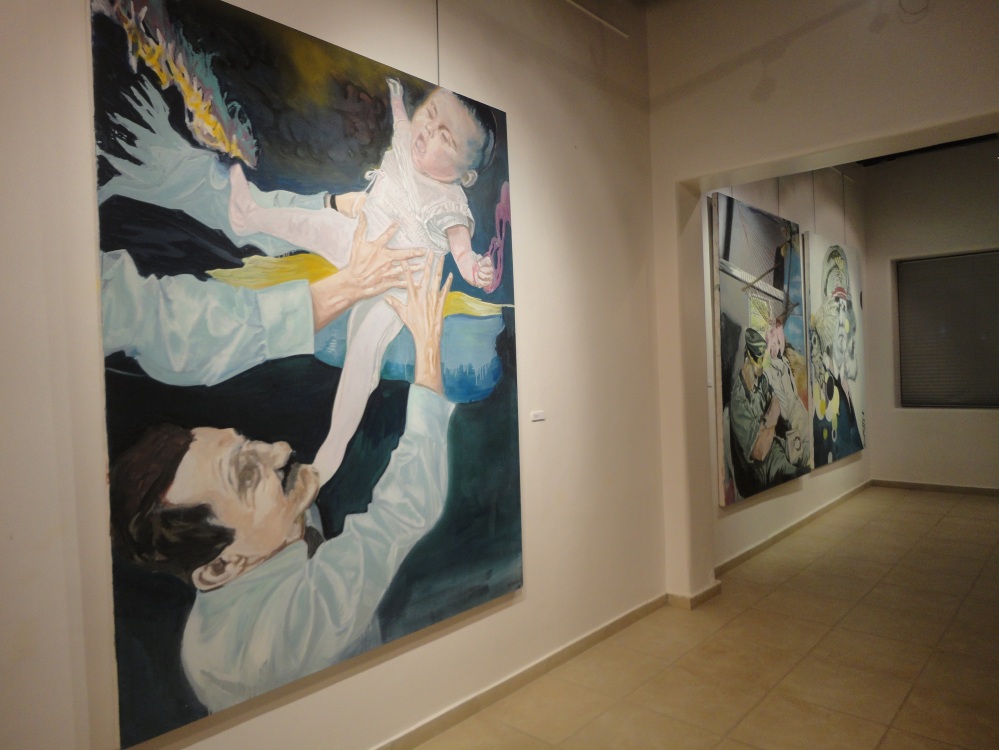 Al Maha: Many Arab artist adopt the Palestinian Case in the artworks. What makes yours special?

Jeffar: I present my artwork in a new approach using contemporary modern techniques (Spray Painting & Printing) which are very important if you want to deliver a strong message. Every artist has his own ideas & goals; my aim is each time you look at my artworks you discover something new. I believe the level of maturity & experience I reached allow me to create valuable artworks.

Al Maha: What are your upcoming projects?

Jeffar: Well I am working on a project which is based on the concept of: One being so drowned deeply into something (love, sex) that he/she disconnect themselves from the world. A strongly rules-breaking project that will be done & exhibited during 2012. 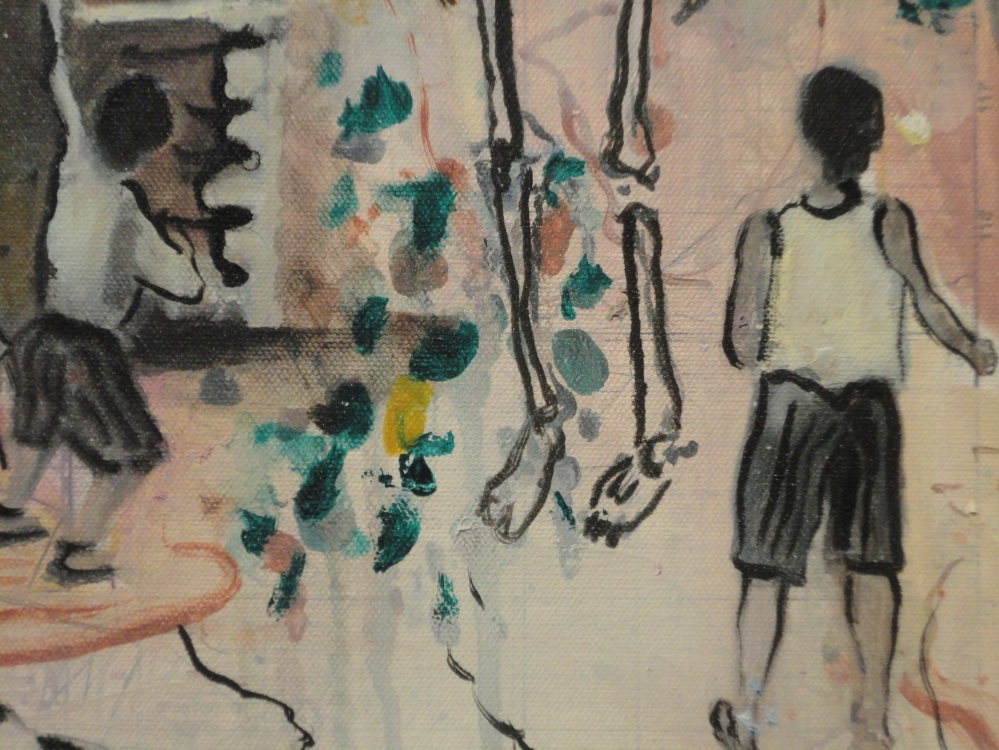 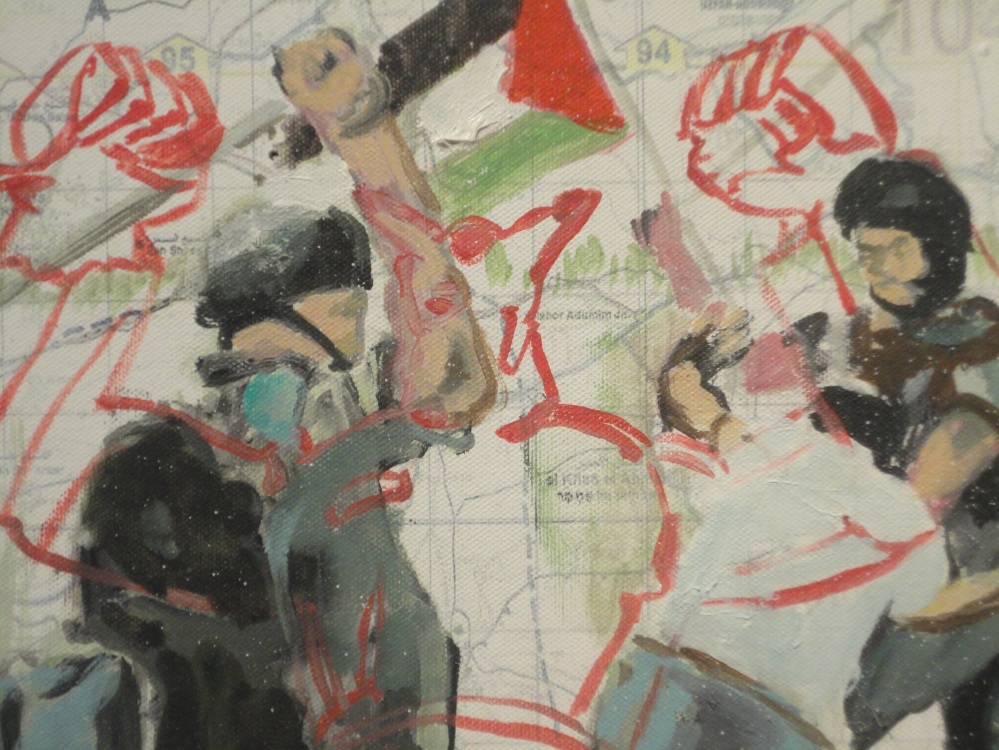 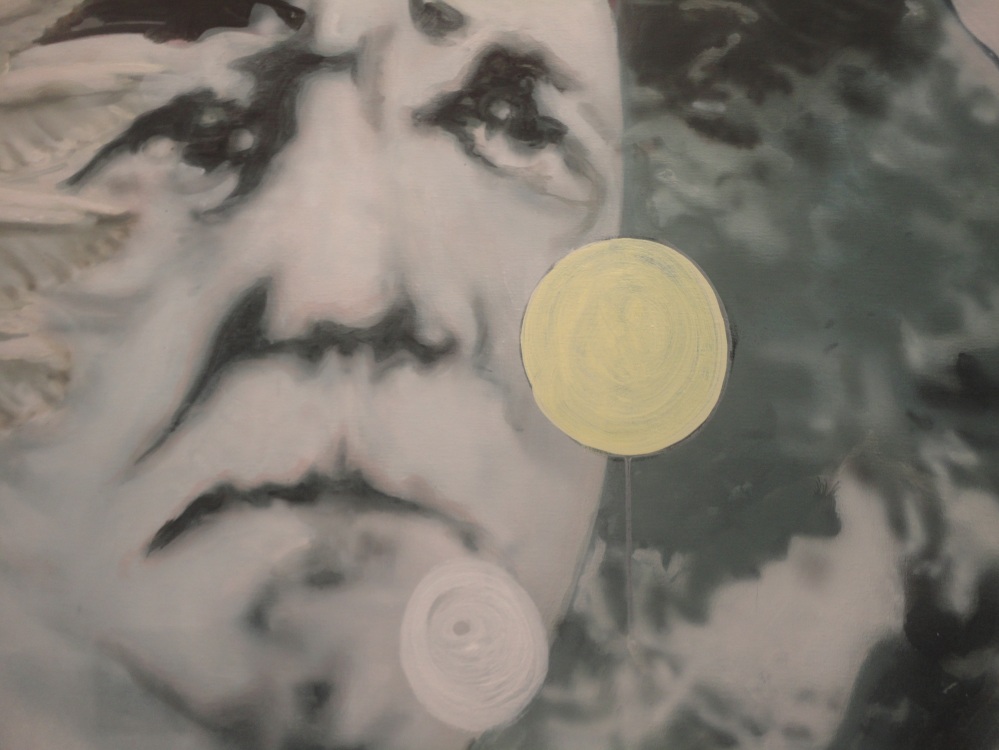 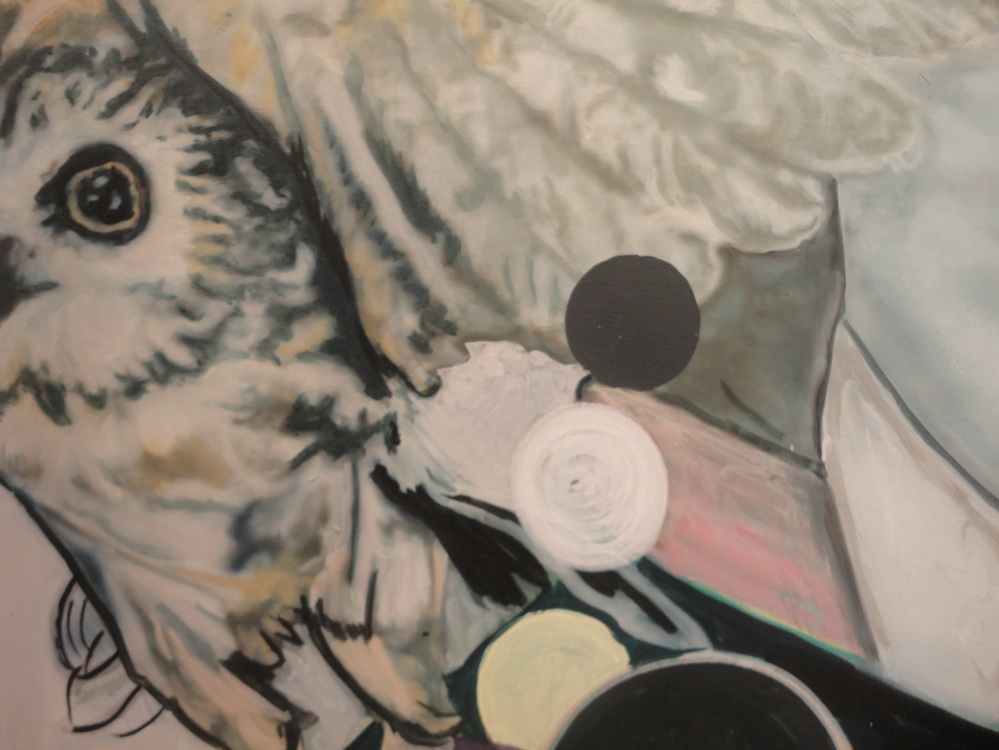 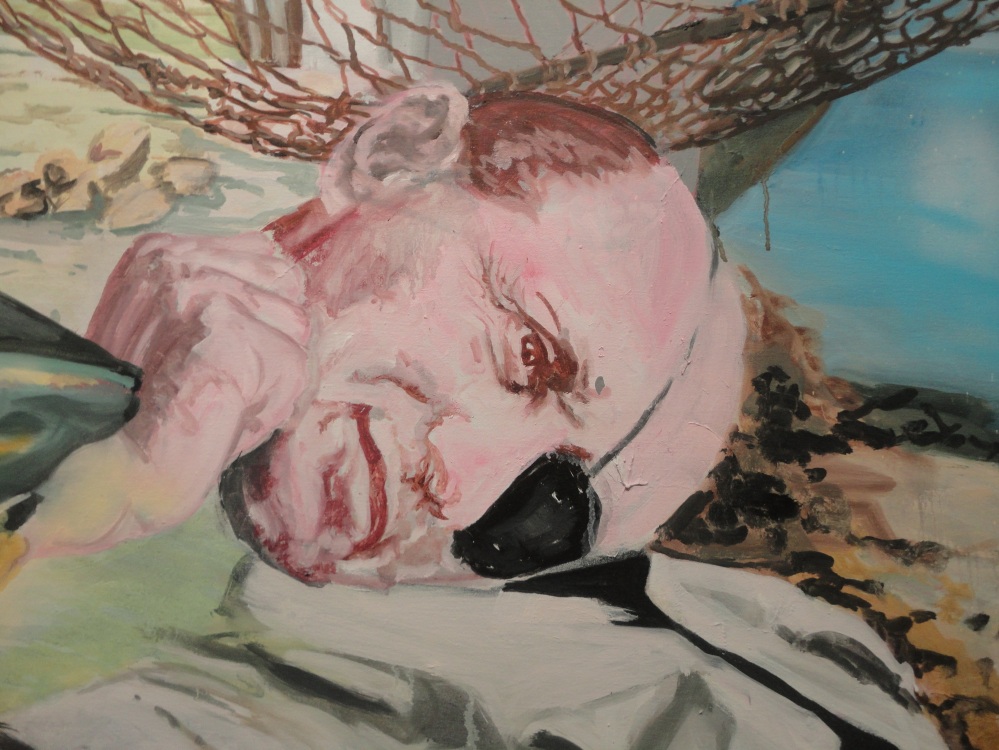 Aggressive, direct, fearless & modern are the exact words to describe Jeffar’s artworks. Regardless of the cause/issue he is adopting, or the concept he is working on, Jeffar will surely shock viewers with amount of emotions and perhaps words he cascades in paintings. Utilizing -as he said- contemporary methods serves him a lot in delivering a straight to the point message. Because there is a big amount of reflected feelings, you won’t look at Jeffar’s artworks as “another picture” or “painting” trust me you will stand and think not only in techniques but also in message. Whether yoy like it or not, Jeffar’s artworks build a discussion & will defenitly leave a mark in your mind.